After moving back to the Seattle area last year, I decided I wanted to volunteer at Seattle Humane. I was fairly “broken and bruised” – literally and figuratively – after pursuing a music career in NYC for six years, and I had a gut feeling that focusing my energy on a greater cause would be the best way to recuperate. Plus… it doesn’t get much better than cuddling with adorable dogs as a form of therapy. That being said, I had absolutely no idea what I was doing when I started training as a DBS volunteer (dog behavior and socialization). The prerequisites were that you had to be comfortable handling dogs of all sizes, be okay with getting dirty, and be able to lift at least 50 pounds. Check, check, check. But until then, I only had experience with my three tiny Yorkies when I was growing up in Hawaii, and a two-week visit with my bestie’s Shih Tzu, Kai. Still, I’m the type who jumps into things head-first once I make up my mind. And I’m so glad I did, because in all my hours of training and hands-on experience, I’ve learned an invaluable amount of information during my first year volunteering at Seattle Humane. Here are my top takeaways:

Dogs are constantly communicating with us.

One of the first things I learned during my volunteer training was how to read dog body language. As soon as I figured out how to identify and interpret their physical cues, I realized dogs are constantly communicating with us – and there’s really no such thing as “OMG, my dog totally freaked out for no reason.” Whether it’s happiness, stress, fear, etc… dogs are always telling us how they’re feeling, and several of those cues can have different meanings depending on the situation and surroundings. It’s up to us to figure it out.

Dogs are far more intuitive than we give them credit for.

Sure, the general consensus is that dogs have the intelligence of an average human toddler. But unlike most toddlers, they can sense strong human feelings and emotions such as fear or stress. And many will actually try to comfort you if they think you’re sad.

We should totally support high-kill shelters.

I’ve had some amazing people donate to Seattle Humane after seeing me post photos of our adorable pups on social media, and learning that we’re a no-kill shelter. Before volunteering at Seattle Humane, I shared the same sentiment – that I should only support no-kill shelters. But it’s actually the high-kill shelters (“municipal shelters”) that we should be supporting, as they’re the ones who are overcrowded and don’t have the luxury of turning away unwanted pets.

Since Seattle Humane is a private nonprofit organization, we can pick and choose how many dogs we take in, and we regularly transfer in pets from around the country. Municipal shelters, however, are usually run by the local government and have to accept every. single. animal. that is dropped off at their door. In other words, they’re an open admission shelter with a set budget. No facility in the world could possibly handle that level of intake, so they have no choice but to euthanize the pets who are unable to find a forever home, foster home, or transfer to a different facility. This video breaks it down better than I can.

A no-kill shelter earns its title when a certain percentage of animals is adopted out alive – I think it’s 90%, but don’t quote me on that. So basically… if a community came together to foster, adopt, and raise funds for a municipal shelter, it’s totally possible that they could also reach “no-kill” status. But it’s up to you. Of course, I’m thrilled if anyone wants to donate to Seattle Humane. But if you have a municipal shelter nearby, I encourage you to reach out and learn more about how you can help.

Fostering animals, especially those at municipal shelters, literally saves lives. Even at Seattle Humane, we have some dogs who are in need of regular behavior training or need to learn what it’s like to be a “normal dog” in a home environment. Spending time in foster can make all the difference between a dog becoming an adoptable family pet, or developing problematic behavior that gets them into trouble.

Being a dog owner doesn’t mean you know more.

I was pretty intimidated when I first started my volunteer shift, as I was one of the only volunteers who didn’t have any pups at home, let alone any significant dog experience. I hadn’t even interacted with a pit bull before, and we had several waiting for walks at Seattle Humane. But after going through my training sessions with several volunteers who have owned dogs for decades, I realized I was in great company – because being a dog owner doesn’t mean you know squat about how to properly train, raise, and socialize your dog. After spending hours studying dog body language, animal psychology, and positive behavior training, it was beyond encouraging to hear so many lifelong dog owners comment about how much they were learning. I was definitely someone who believed all the “old wives tales” about dogs and how to handle them (ex: screaming “no” to correct behavior or buying into the outdated “dominance theory” thing). But now I’m proud to say I know better. 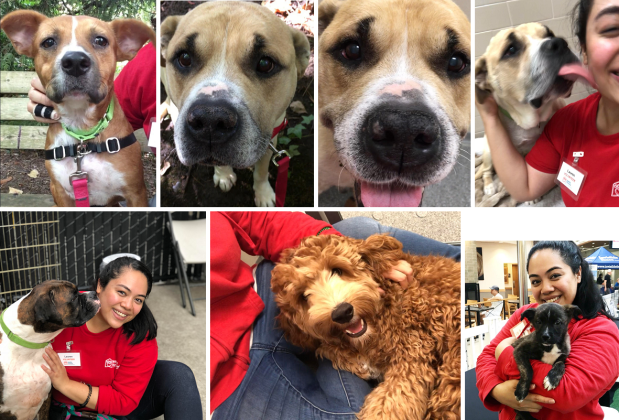 The Pacific Northwest is an incredible community.

When a shelter dog gets transferred to the Pacific Northwest, it’s considered “a dog’s golden ticket.” Aside from the fact that we have a crazy high level of adoptions and rescues, Seattle Humane was able to raise $1.8 million dollars in ONE NIGHT during our annual Tuxes & Tails gala this year. Supporters include everyone from the Bill and Melinda Gates Foundation, to the Nordstrom family, to T-Mobile, to Pearl Jam; and because of them, our dogs can be spoiled and pampered until they get adopted. (We’re talking temperature-controlled kennels, plush beds, tons of toys, and calming sound machines.)

Dogs teach us to live in the moment.

No matter how much stress or anxiety I may be feeling at any given time, all of it seems to melt away as soon as I clock in for my Friday afternoon shift. There’s something incredibly innocent – yet wise – about dogs and how they live in the moment, no matter how much negativity they may have experienced. I’ve interacted with dogs who had been abused, but melted as soon as I started petting them; and the fact that they were able to trust me… a human, much like the one who had treated them poorly in the past… blows my mind. I’ve sat for a half hour with Avery T. Yams, a 90-pound pit bull, and watched cars drive by. I’ve spent hours with Potato, a bull mastiff mix, who wanted nothing more than to cuddle and give kisses. And I’m currently obsessed with Rodger, a German shepherd who hasn’t been adopted yet, but still flashes a megawatt smile and leans against me during our walks together. If we could all learn to appreciate every good moment that comes our way, no matter how short it may be, then maybe we’d all be happier in our everyday lives. But until I’ve mastered that skill, I’m just gonna remain thankful for each day I get to spend with these gorgeous beings, with the hope that I can give them even half of the love and happiness they’ve given me.

For more information about Seattle Humane and how you can help, CLICK HERE.