Stone Crab Season is the Best Thing Ever

I wasn’t sure if I wanted to write a blog post about something so seemingly trivial as crab (even though it’s my ultimate favorite thing in the world). But then I read a lengthy Vogue article completely dedicated to this delicious crustacean and figured… if Vogue can do it, so can I.

Crab has been at the top of my “favorite foods” list since I was a toddler, thanks to the whole “being born and raised in Hawaii” thing. In my family, special dinners typically consist of steak and crab, whether it’s whole Dungeness crabs, or Alaskan King crab legs. But it wasn’t until last year, when I visited my friend Bekki at her new home in Florida, that I tried stone crab for the first time. And ah-mah-gad… stone crab claws are effin’ amazing.

Harvested off the Florida coast, stone crab season runs from October 15th – May 15th. What makes these crabs different is that they’re a sustainable food resource – that is, they can regrow their claws. During harvest season, commercial fisherman are allowed to harvest claws that are at least 2-3/4 inches long, releasing the live crab back into the water. Some harvest both claws, although many fishers harvest one, allowing the crab to keep one functional claw for its own hunting and defense purposes.

Unlike most crab legs, stone crab claws require a proper mallet to be broken (the shell is crazy thick and hard – hence, the “stone” part of their name). The stone crab claws Bekki treated me to were of the Colossal variety, which were the same size of my hand and weighing about a half a pound each. Once you remove the top part of the shell, you can pretty much eat a single claw the same way as you’d dig into a turkey leg. The meat is sweet, firm, and incredibly succulent.

We served our stone crab claws with grilled steaks, sauteed asparagus, garlic bread, and a tomato cucumber salad, which went down in my foodie history as one of the best meals of my life. But no matter what accoutrements you choose, there’s one absolute must for stone crab – the creamy mustard sauce. Seriously. I bought a jar of mustard sauce at Publix, then doctored it up with some extra mayo and seasoning. To be honest, I can’t remember exactly what I did, but it put the stone crab claws over the top, and I kept dipping asparagus spears into it afterwards.

As someone with a crazy healthy appetite, let me warn you – I ate three of these claws (and not much else, except the asparagus) and could hardly breathe when I was finished. These mofos are filling. And even if you don’t find yourself in Florida during stone crab season, you can still order claws to be delivered anywhere in the U.S. through Joe’s Stone Crab. They’re pricey, but trust me… if you’re a seafood fanatic, stone crab claws are totally worth the price. 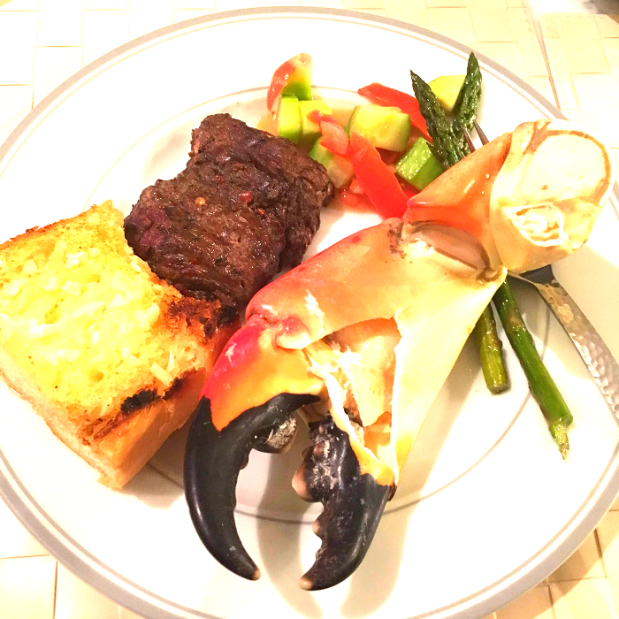 ← Iconic Songs about NYC
Aladdin at the Paramount Theatre in Seattle →