Aladdin at the Paramount Theatre in Seattle

Thanks to my mom, I grew up with a total love for musical theater. From the age of three, she took me to see productions like The Music Man and West Side Story when they were touring in Hawaii, and I’ve been hooked ever since. So this year, I couldn’t think of a better 69th birthday present for her than “dinner and a show” – especially since Disney’s Aladdin was touring here in Seattle at the Paramount Theatre.

Although New York City is the home of Broadway, I love how top productions manage to find their way to the Pacific Northwest – and at a fraction of the price. I haven’t been to the Paramount Theatre since I was in high school and saw the Radio City Christmas Spectacular with the Rockettes (I also stole some of their choreography for my drill team’s State competition). So it was great to be back in the beautiful vicinity for Aladdin, which I’ve been dying to see for years.

I’ve seen Les Miserables in London and On Your Feet! on Broadway, but I must say… this traveling cast of Aladdin may actually be my favorite. From the first few seconds, I was hooked – especially since the opening act included an unexpected shout out to the Seattle Seahawks. Then, once the music began and the cast broke into “Arabian Nights,” I almost got teary from the amazing harmonies alone. The costuming was fabulous (lots of sequins, just how I like it), and the staging was great (they made complete use of a relatively small stage).

More than anything, the casting was fantastic. Adam Jacobs played the role of Aladdin, which was amazing. Not only is he hot as hell (apologies to the wife), but he was also the original Aladdin when the musical debuted back in 2011 – aka it was perfection. Even his speaking voice sounded exactly like the animated character. FUN FACT: Aladdin the musical actually debuted here in Seattle at the 5th Avenue Theatre before it made its way to Broadway in NYC.

Some notable characters include  Genie, who was played by Korie Lee Blossey. I don’t even know how he managed some of those numbers, as there was a crazy amount of simultaneous, fast-paced singing and choreography. Also, in lieu of Abu the monkey, Aladdin the musical has three hilarious friends – Babkak, Omar, and Kassim. I’m always wary of original numbers, since I’m all about the classic songs in Aladdin, but these guys had my dying with laughter during each of their songs. And by the time intermission rolled around, I wanted to marry Kassim, played by New Yorker, Mike Longo.

Having just a teeny bit of experience in musical theater myself, I need to point out how diverse this cast was in terms of talent. Not only could they all sing, but their ability to deliver such rigorous choreography was nothing short of awe-inspiring. You’ll have to see it for yourself, but when Adam Jacobs (Aladdin) broke out into tap dancing during “Never Had a Friend Like Me,” I couldn’t help but scream my head off.

Bottom line – I give Aladdin the musical 5/5 stars… 10/10… whatever the standard is these days. If you’re in the Seattle area, the show is in town at the Paramount Theatre through October 29th. I’m not sure how many tickets are still available, but if you’re able to score some, I promise you won’t regret it. There’s only a small handful of musicals I’d want to see live more than once, and Aladdin is definitely one of them.

Click here for tickets and more shows at the Paramount. 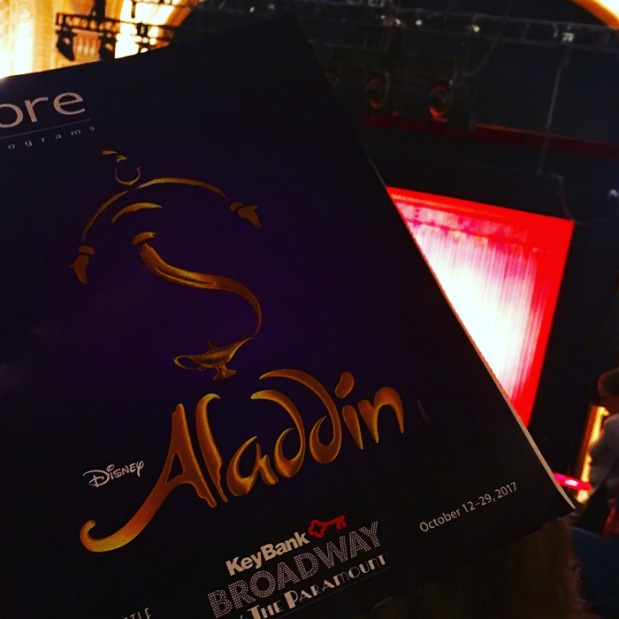