After six years working for the world’s top luxury bridal publication, I was finally asked to attend New York City’s Bridal Fashion Week last month, covering the fashion shows and events for the magazine’s social media pages. For three straight days, I was running around the city for 12-14 hours sitting in the front row of fashion shows, meeting with designers behind the scenes, uploading photos and videos to social media in our chauffeured car from Luxor Limo between shows, and mingling over far too many glasses of champagne. It was probably one of the most exhausting times of my NYC life, especially since I was in the middle of moving back to the west coast. But it was also one of the most epic.

My “crew” for Bridal Fashion Market consisted of my accounts manager and two of the best wedding photographers in the industry – Josh Wong and Ray Santana. It was amazing to watch the guys work behind the scenes and be able to choose the dresses they shot for our editorial coverage. It was also fantastic to meet the guys in person, because I interviewed Josh last year for a photography feature I wrote in the last issue, and I wrote the story for a wedding Ray shot in Hawaii. You’d think, being high-profile photographers and all (Josh photographs the Victoria’s Secret fashion shows), they’d be a bit “hoity toity.” But they were incredibly down-to-earth and hilarious to hang with. To be honest, the week had far too many highlights to list – but here’s some of them.

*All photos are courtesy of Josh Wong for Grace Ormonde Wedding Style Magazine. Except for the obvious selfies.

…I was obsessed with the evening wear collection.

It was the label’s 20th anniversary, so Reem Acra was in partnership with Tiffany & Co. – an inspiration that was more than evident in the amazing couture wedding gowns. I loved this design with jeweled dragonflies and butterflies.

The “Pink Panther” at Peter Langner.

Fashion shows tend to be very stoic, but Peter Langer opened his presentation with a cheeky model who WERKED that dress like no other. And when she turned around, you could hear everyone go, “WOOOOOOW…!”

What’s better than sipping champagne, eating fried macaroni and cheese balls, and walking around an airy sky-high space surrounded by a gorgeous 2018 collection by Gemy Maalouf?

A regal collection by Francesca Miranda.

It was an early 9am show (I was so tired that I couldn’t even finish my mimosa), but seeing this blush empire waist number was SO worth it.

The Berta fashion show at the Plaza.

I haven’t been to the Plaza since my friend Bekki’s surprise engagement party. It’s my favorite hotel in NYC, and the show was fierce. 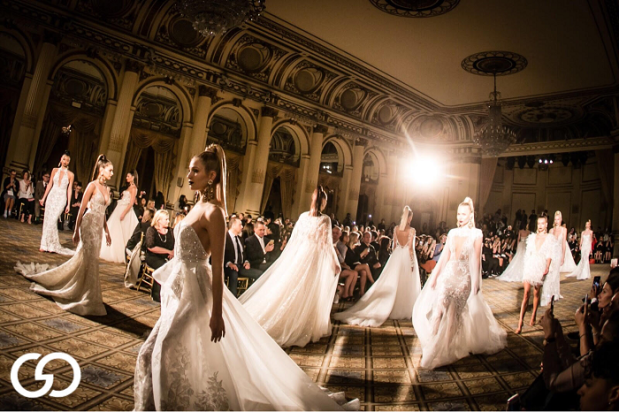 I love all the photos from Josh’s backstage coverage.

I have been a fan of Golf and his floral design work for years, so it was an honor to sit with him at the Ines Di Santo show.

This red dress… I need it, even if only to wear during a grocery run to Safeway. Everyone gasped when the model walked out. Our appointment with Galia Lahav.

When it comes to wedding gowns, Galia Lahav will always be queen in my book for her low-back designs.

When Josh took this gorgeous Galia Lahav girl to the bathroom.

He noticed the tile in the background, whereas I was too distracted by the fact that the toilet had a remote control. (It was some $10 million dollar penthouse downtown). This is the shot he captured.

This backstage shot at Jenny Packham.

I loved the crimped and undone hairstyles at the Jenny Packham fashion show. 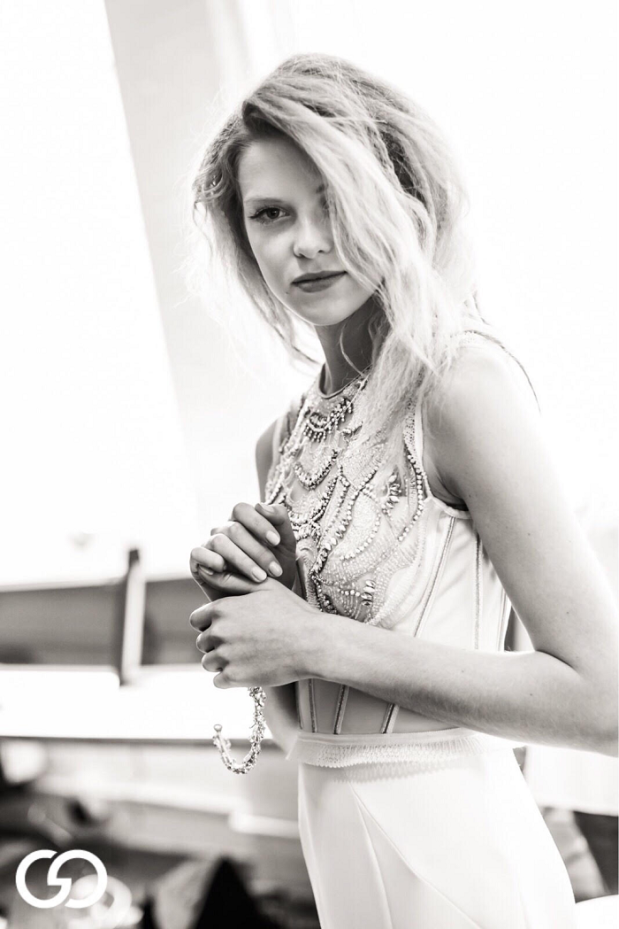 Choosing the dress for our last round of Bridal Fashion Week photos.

This gown at Christos Costarellos stood out to me, even when hanging on the rack. The floral, and almost snowy, detailing was exquisite. Finding “MY DRESS” at Pallas Couture.

Our last day began at the Essex House, and we met with the phenomenal team of Pallas Couture. While they were showing us some affordable styles from their diffusion line, I wanted to see something from the couture collection. My colleague said we had time for me to choose one style, so I picked the dress my eyes zoomed in on when we entered the room. It turned out to have a seven-foot train, and the Pallas Couture assistants literally had to move the furniture so Josh could photograph the dress. When the model walked out, I almost started crying because this gown was EXACTLY what I’ve always wanted – a plunging neckline, low back, and a stunning detachable skirt that you can remove, revealing a sleek and sexy second look. It sounds ridiculous, but purely from a creative perspective… it’s a bit overwhelming when you see a vision you’ve always had in your mind, materialized in real life. I told them to hold the dress for me so I can buy it in ten years when I save up $20K and marry myself. They laughed. I wasn’t kidding.

Hanging with these guys.

I didn’t know what to expect going into Bridal Market, but these guys truly made me feel like part of the team. All the goofiness and hilarity helped ease the insane stress and exhaustion of the week, and I couldn’t have had a better time. Hopefully, I’ll be able to work with them again in person someday – and if not, at least I’ll get to follow along with their work around the world and write more of their features for the magazine. 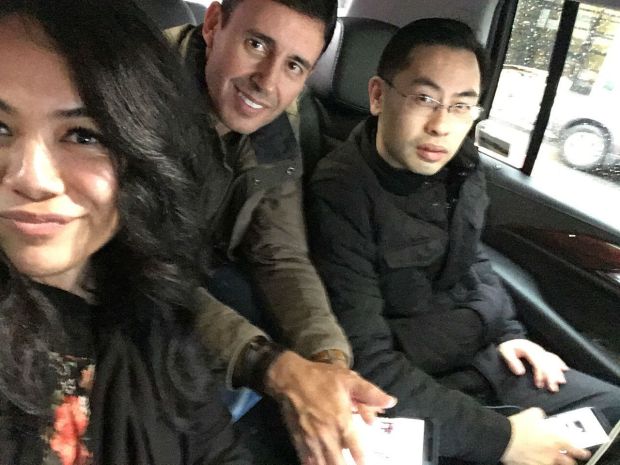