Why I Don’t Mind the Leo-Oscar Mania

As much as I want to win a Grammy for songwriting someday, I don’t watch the Grammy Awards. And one of my best friends, an actress, avoids the Oscars like the plague. There’s so much shadiness, politics, and general corruption involved with award shows that I can’t really bring myself to watch them anymore, and I even find the whole “red carpet fashion” thing boring (I’ve been in the fashion industry for about ten years now and associate all of that with work).

The only thing I find more annoying than award shows themselves, is the barrage of comments, memes, and videos on social media the next day – usually, all re-posting the same crap. But this year, I’ll admit there’s one story I don’t mind repeatedly popping up in my news feed: Leonardo DiCaprio winning an Oscar. Even though the walls of my bedroom only had one poster of him during my preteen years (I was more of a Nick Carter girl), it’s hard not to be Team Leo for a variety of reasons.

If you can do what you do best and be happy, you’re further along in life than most people. -Leonardo DiCaprio

He’s not an attention whore.

How many interviews have you really seen this guy do? In fact, I don’t think I actually heard him speak in real life until this year’s Golden Globes. Considering he’s a big time A-Lister, Leo keeps a low profile.

He uses his platform for good.

If you go on Leo’s Facebook fan page, it says he’s an “Actor/Director” – which is confusing, since all of his posts are about clean energy, oil spills, and environmental preservation. There’s no publicity about his movies, no collection of selfies, and nothing hinting that he might have a narcissistic personality disorder. He posted a thank you for winning an Oscar, but that was literally the first acting-related post I’ve seen. And I love that he used his extra time during his Oscar acceptance speech in order to bring awareness to global warming.

Leo proved he was more than just a pretty face when he starred with Johnny Depp in What’s Eating Gilbert Grape? Since his big break in This Boy’s Life, he has played such a wide range of characters, it’s hard to believe this was only his first Academy award win. And this win caused everyone to look back at his body of work and realize how talented he 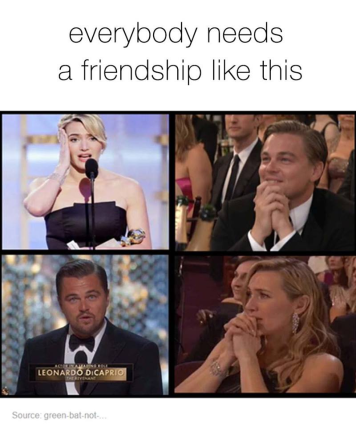 really is. The Basketball Diaries, Titanic, The Beach, Romeo and Juliette, Catch Me If You Can, Wolf of Wall Street, etc. The guy has some serious acting chops.

It was a long time coming.

Leo has been acting for nearly 30 years; and despite being consistent with starring in major roles that garnered plenty of Hollywood attention, he didn’t win an Oscar until the age of 41. That win, however, has been more talked about and more celebrated than any other Oscar victory I’ve seen in recent years. Why? Because Leo earned it. He worked for it. He’s not some shiny-faced new star who got lucky right out of the gate, but a Hollywood veteran who has repeatedly given us amazing performances regardless of Oscar nominations or wins. Basically, Leo’s win is proof that 1) consistency always pays off, 2) everyone has their time – this was his, and 3) the longer you wait for something, the sweeter it is.

So congratulations, Leo and thank you for bringing a sense of eloquence, humility, and old-fashioned hard work back to the Oscars.

Too cute. As I write this, I’m surrounded by boxes of Girl Scout cookies and I ain’t even tryin’ to share ’em.