A Posh Seafood Fix at The Sea Fire Grill

Last month, my friend Bekki flew in from Florida to visit for a couple days during the election. After the new president-elect was chosen, New York City seemed more depressed than I’ve ever seen it in the past six years. But rather than looking as if someone had just kicked our puppy, Beks and I did what we did best – we ate, drank (a lot), and acted merry (we all cope in different ways, right?). I seriously have the best friends, because in the midst of feeling down, Beks treated me to an amazingly posh seafood fix at the Sea Fire Grill. And fortunately, we stopped by during truffle season.

After ordering a couple glasses of sauvignon blanc, the bread basket arrived. Believe me when I say, I’m not one of these people who think bread baskets and the Cheesecake Factory are the epitome of sophistication. But the three dipping sauces put it over the top. The wine kicked in fast, but I believe the trio included truffle and sea salt butter, a whitefish and mascarpone cheese spread, and a fruity olive oil.

As an appetizer, Beks and I shared the crab cake with red pepper coulis, celery root remoulade, and frisee salad.

Beks ordered the branzino, which was perfectly cooked and super yummy.

Since I was having massive seafood cravings, I ordered one of the Sea Fire Grill specialties for the evening – mushroom gnocchi with lump crab, shaved truffles, microgreens, and caviar in a butter sauce. Not only was it beautifully presented, but it was the perfect fall dish that was hot, comforting, and oh-so posh. This photo doesn’t do it justice… it was uh-MAY-zing. 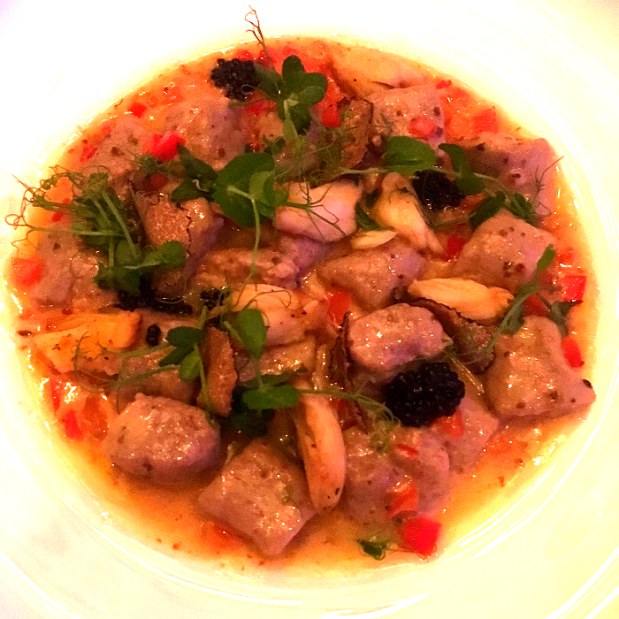 I’m not one to order dessert, but the vanilla bean creme brulee and passion fruit panna cotta caught my attention. So Beks ordered both (I wasn’t lying when I said my friends are the best). Even though we were stuffed, the desserts were too delicious not to finish.

I can honestly say, as a seafood freak, Sea Fire Grill is one of the best restaurants in New York City for seafood. The atmosphere is perfectly sleek and swanky, the crowd is mostly businessmen and women coming from work, and the service is very friendly (not always the case in NYC). For more great seafood places around the city, check out the rest of my recommendations on Tracy’s New York Life.