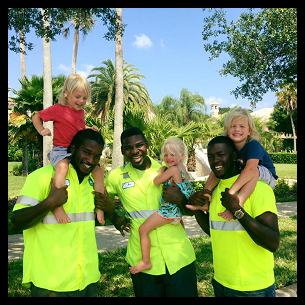 HAPPY GARB DAY! If you have no idea what I’m talking about, I’m referring to my newest obsession involving the three most adorable triplets I’ve ever seen and their local sanitation engineers.

Heaton (Big Boy Heat), Holden (Punkie Pie), and Wilder (Wild Man) – collectively known as the Snicker Doodles – have been brightening up our Tuesdays and Fridays ever since their mother, Florida news anchor Martha Sugalski, began posting videos of the triplets on Facebook.

From their days rolling around in a stroller, the Snicker Doodles have had a fascination with seeing the garbage truck pull up and always stopped to watch. Originally, their interactions began with Mr. Andrew, who would wave to the babies whenever he passed by. Over time, Mr. Rob and Mr. Chad were added to the mix and the twice-a-week visits now include chit chat, handing the guys snacks, and tons of hugs.

It’s seriously addicting, not to mention heartwarming, to watch the little boys squeal and jump around as they see the garbage truck arriving, holding up Gatorade to give their friends. Pie, however, usually remains calm and waits until her favorite, Mr. Rob, gets out of the truck so she can give him a cuddle. Browsing through photos of them all, it’s clear – even the best photoshop skills can’t fake this level of love.

Without any exaggeration, Martha is one of the best examples of parenting I’ve seen in recent years. I love how she’s teaching her kids to treat everyone with love and kindness, I love how she allows her children to freely interact with their friends without hovering over them, and I absolutely love how the Snicker Doodles are always running around barefoot. Even when the triplets celebrated their third birthday last weekend, Rob, Chad and Andrew were invited to the party and brought along their own kids and family. (The trips also received matching neon yellow shirts that say “LITTLE HELPER” on the back – kind of like an official initiation into the garbage crew.)

If you’re on Facebook, go and follow Martha Sugalski immediately. In the middle of my crazy workload and NYC stress, Garb Day has become one of the few things I can count on for an instant smile and a feelgood moment. But I’m warning you now… it’s impossible NOT to fall head-over-heels in love with these kids. Pie is adorable, Heaton and Wilder are perfection, and the way the men interact with them is too sweet for words.

* All photos courtesy of Martha Sugalski