Boozy Brunches at Pardon My French

I love everything French (except maybe their showers/water pressure). Unfortunately, my French speaking skills began to slip after moving back to the states, because… well… if you don’t use it, you lose it. So I was excited when my BFF Rae booked us in for a boozy brunch one weekend at PMF – Pardon My French – in the East Village.

First of all, PMF is known for their waiters, as they all speak French fluently. It’s also no coincidence that most of the patrons I saw were females who couldn’t help but staring at the staff as they refilled bottomless Mimosas and explained the menu en francais. Seriously. One guy was so hot that he almost made me think man buns were acceptable (I still vote “NO” on that one). 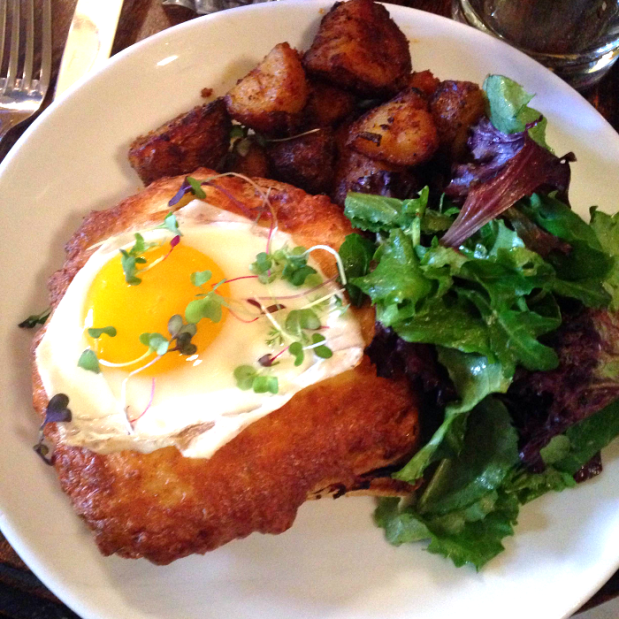 Anyways, Pardon My French offers one of NYC’s classic brunch specialties. For $28.95, you get one entree plus bottomless Mimosas or Bloody Marys for two hours – any longer than that, and my man bun waiter would’ve had to drag me out of the restaurant. I ordered the Croque Madame while Rae opted for the brioche French toast. And as you can see, they were both delicious and paired perfectly with the dozen Mimosas we tossed back.

There’s plenty of French restaurants in the city, but many tend to be a lot more… “uppity,” for lack of a better word. Also, they don’t have a waitstaff who is fluent in French and allows wannabe Parisians like myself to pratiquer nos francais. I also loved the cozy, laid-back vibe of the place and how effortlessly cool it felt. Just a buncha NYC locals hanging out, eating some simple French fare, and enjoying endless pitchers of champagne-infused orange juice. So if you’re looking for a French food fix, a bomb brunch deal, and a unique atmosphere, definitely head down to the Lower East Side for a meal at PMF.